The gang’s all here for the complete second season of this wry and witty sitcom
Frasier Crane infuriates the entire city of Seattle when he complains about its rainy climate during his radio talk show
Meanwhile, his father Martin finds his favorite bar is slated for the wrecker’s ball -and could it be that Frasier and Niles are behind its demise?
Roz considers a new job offer…Daphne finds her privacy invaded…and Frasier’s romantic island getaway with a new girlfriend is ruined when his ex-wife is discovered happily ensconced in an adjacent cottage! 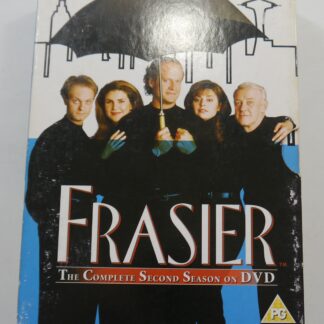