Item Features
Double-bill of animated movies about a gang of prehistoric animals who become close friends
In ‘Ice Age’ (2002), the story begins at the dawn of the great ice age, when a group of three animals embark upon an epic journey
Sid the sloth, Manfred the mammal, and Diego the sabre-toothed tiger team up to help return a human baby to its father, and must risk life and limb as they traverse boiling lava pits and travel through dangerous ice caves to complete their mission
Along the way they also meet Scrat, a squirrel-rat determined to plant an acorn in a glacier
The film features the voices of John Leguizamo, Denis Leary and Jack Black

In ‘Ice Age 2 – The Meltdown’ (2006), Manny the woolly mammoth (voice of Ray Romano), Sid the sloth (Leguizamo), Diego the saber-toothed tiger (Leary), and the hapless prehistoric squirrel/rat known as Scrat (Chris Wedge) are back in this sequel to the popular 2002 film
Manny is ready to start a family, but nobody has seen another mammoth for a long time
In fact, Manny thinks he may be the last one
That is until he miraculously finds Ellie (Queen Latifah), the only female mammoth left in the world
The only problem being that they can’t stand each other
Ellie comes with some excess baggage in the form of her two possum friends, Crash (Seann William Scott) and Eddie (Josh Peck), a couple of daredevil pranksters and cocky, loud-mouthed troublemakers When a huge glacial dam holding off oceans of water is about to break, threatening the entire valley, the only chance of survival lies at the other end of the valley
So our three heroes, along with Ellie, Crash and Eddie, form the most unlikely family as they embark on a mission across an ever-changing, increasingly dangerous landscape 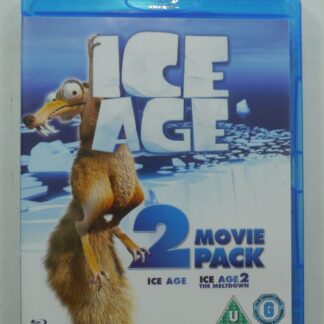