In ‘Once Upon a Time in America’ (1984), set in 1968, gangster Noodles (De Niro) returns to New York after 35 years in exile
His return prompts memories of his and three others’ rise to power from the streets of New York’s Lower East Side during Prohibition
Also starring James Woods, Elizabeth McGovern and Treat Williams

In ‘Heat’ (1995) De Niro stars as Neil McCauley, the criminal mastermind in a gang of professional thieves (which includes Tom Sizemore and Val Kilmer), who unwittingly attract the attention of super-cop Vincent Hanna (Al Pacino)
Hanna will not stop until he catches the gang in the midst of committing a crime, an obsession that alienates him from those he is close to

‘Goodfellas’ (1990), Martin Scorsese’s violent true-life gangster epic, follows Henry Hill (Ray Liotta) as he rises through the ranks of the Mafia
Upon turning FBI informant to help pay for his drug addiction, Hill recalls how he got started in the Mob following the $6 million robbery of a Lufthansa cargo at a New York airport
Hill and his partners, Jimmy Conway (De Niro) and Tommy De Vito (Joe Pesci), became increasingly powerful members of the Mafia over three decades, eventually eliminating Paul Cicero (Paul Sorvino), the neighbourhood godfather who originally took Hill under his wing
Joe Pesci won an Oscar for Best Supporting Actor

‘The Mission’ (1986) follows the conflict between slave-traders and Jesuits during the colonisation of South America by Spain and Portugal
In 1750 Jesuit priest Gabriel (Jeremy Irons) arrives in the Amazon to build a mission for the Guarani Indians
He comes into conflict with slave trader Mendoza (De Niro), who kills or captures many of the tribe but escapes punishment due to the fact that he is an aristocrat
However, it transpires that even Mendoza has a conscience when he comes to Gabriel asking for penance 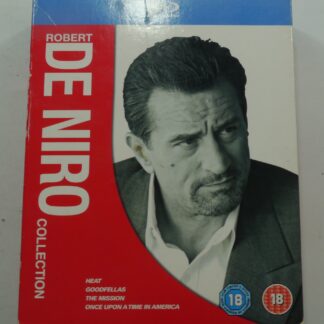