Item Features
Swords and sandals abound in this epic tale of love and war starring Brad Pitt as the muscle-bound Achilles
Set in 1193 BC, the film is based on Homer’s sprawling epic poem ‘The Iliad’. It tells the story of Paris, Prince of Troy (Orlando Bloom), who falls in love with the wife of King Menelaus of Sparta (Brendan Gleeson), the beautiful Helen (Diane Kruger)
He persuades her to leave her husband and go back with him to Troy, sparking a war between the Mycenaeans, led by Menelaus’s brother Agamemnon (Brian Cox), and the armies of Troy, led by Prince Hector (Eric Bana)
The City of Troy, governed by King Priam (Peter O’Toole) has never before succumbed to seige or battle, but Agamemnon and the Mycenae Greeks have a formidable ally: the great and seemingly indomitable Achilles
Political intrigue, passionate love trysts and one-on-one fight sequences take place against a background of sweeping battle scenes as the armies of ancient Greece and the city of Troy engage in their epic and bloody war 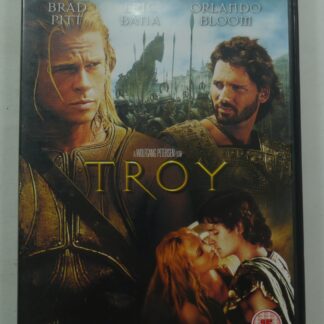